Take an environment specifically designed to encourage full and wholesome exchanges of ideas and to challenge, head-on, perceived wisdom. Then add in keynote speeches from lateral thinkers like Sir Howard Davies. The result? A day of innovation and fresh thoughts on problems old and new shared by a range of handpicked guests able both to participate in and to enhance such quality time.

The Talking Philanthropy symposium of Global Philanthropic on September 16th was based on such alchemy. The day, hosted by Global Philanthropic founder, Ben Morton Wright, at his Great Bealings home in Suffolk, left those in attendance empowered after sharing thoughts collectively and also in groups, inspired by key note addresses from Davies, with his distinguished career in public service, and Geoff Holt MBE DL, the only quadriplegic to have sailed around the UK.

Crucial to the enormous dividend from spending time in this way was the home-posium nature of the gathering. This provided the environment for open thinking and the distillation of three key themes on leadership; that the exceptional leadership that exists in the UK philanthropic sector can transform organizations, that “Give, Get or Get Off” culture for boards prevalent in the US is less the case in Europe where roles can be poorly defined, and that leadership challenges are rarely fixed by single measures, often requiring instead a much wider review and breadth of reappraisal.

For all the creature comforts and modern-day, high-end facilities of hotels and conference centres, hosting at home creates an altogether more intimate environment in which those present feel much more liberated to speak candidly and confide their true thoughts. Certainly this prevailed at Annesley Hall. On arrival, those attending (who had the option of being collected from Ipswich station) were invited to discard their cell phones and other devices, as well as preconceived notions. This cleared the way for focused and undiluted conversation without the sort of distractions or impersonal interfaces for which technology today is almost unavoidably responsible.

Guests, capped at 55 to preserve a sense of intimacy that can be created at a home-posium, included a range of organizational sizes, from income of £500,000 to in excess of £100 million, and reflected all sides of philanthropic relations. Every age, from start ups to long-established operations, was represented. Altogether, in a “safe space” conversations were longer and more in-depth and featured a wide variety of participants compared to more conventionally located events where guests can be less broadly defined. Moreover debate ultimately stimulated global conversations on matters key to philanthropy today highlighting the power of good ideas when developed in quality company.

Morton Wright referenced in his welcome address the desire to provide everyone attending with time and space to think beyond their usual thought process when addressing day to day concerns and looking beyond these to the future. “To create an environment that we could use both for collective effective thinking around complex challenges for the philanthropic space and to focus on leadership,” he maintained. Speeches by Davies, former chair of the Financial Services Authority and the UK Airports Commission, and Holt, who suffered a spinal injury at 18, but was wholly undeterred by this setback going on to sail singlehandedly around Great Britain, were a further impetus for the groups to consider a wide perspective of leadership issues.

Sir Howard, also chairman of the London Library, opened proceedings with a talk followed by a coffee break discussion hosted by Global Philanthropic’s North American president Guy Mallabone with over 30 years of experience in the fundraising sector. Ahead of lunch, guests then made up three break-out groups to consider the words of both Mallabone and Davies in greater depth. 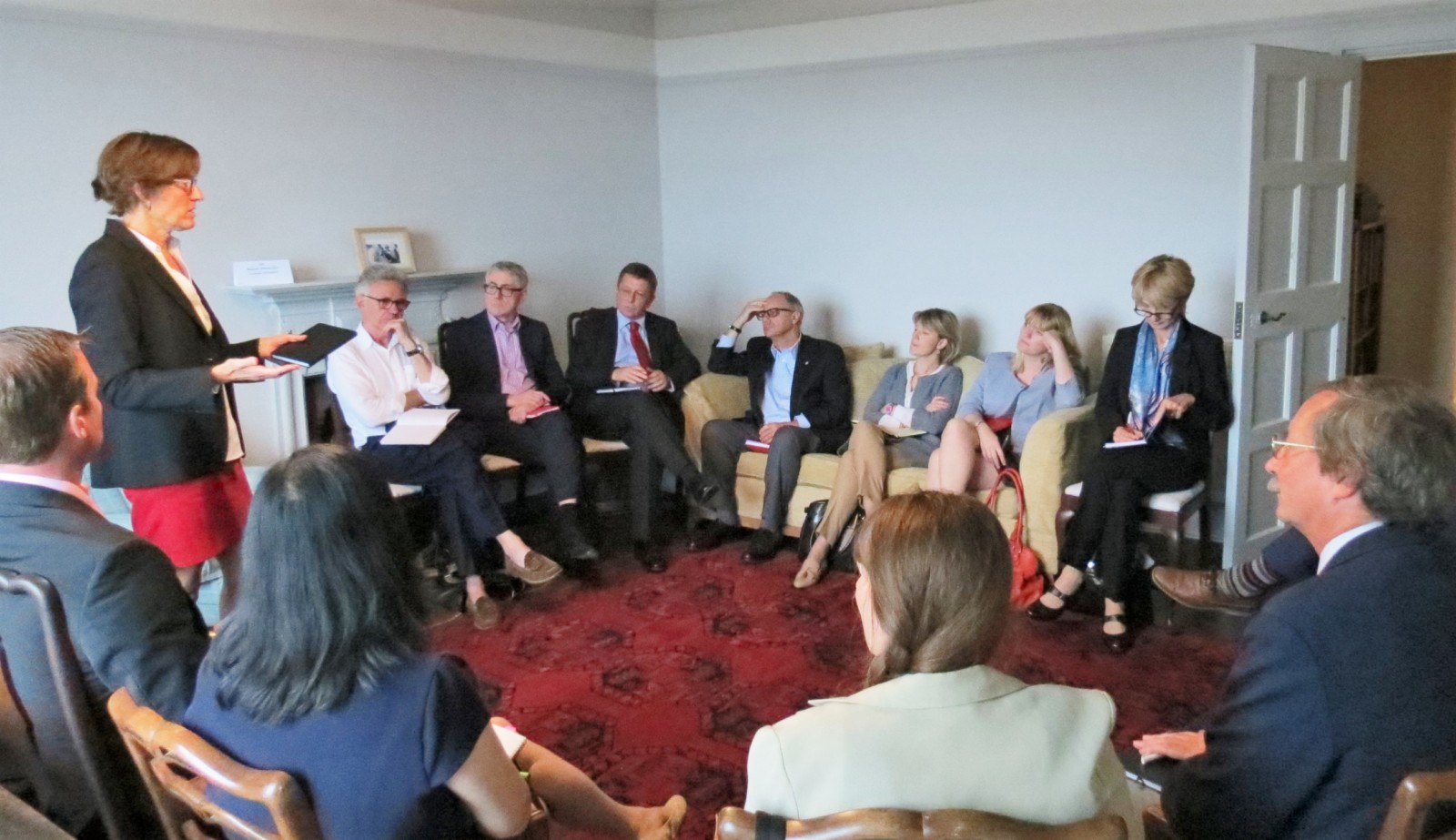 The three groups considered matters such as boards and board expectations, the difficulties that some cultures have with emotive story telling, and the challenge of finding the right metrics to quantify cultural change. Also discussed was the task of countering the notion that sales is a “dirty word” in the philanthropy sector.

Amid this, explored were problems in sustaining continuity. This was discussed especially with donors in mind, and how to engage them in conversation using open methods of communication, while also managing expectations. Then there was the search for balance – personalities versus team – and the opportunity of an organisation’s early days to establish the best possible structure and framework and meet the challenge of finding high-quality, experienced board members. In parallel, break out sessions considered established organisations and their need to bring in new personnel and ideas, and how to ensure everyone is behind an ogranisation’s goals.

Over lunch, Global Philanthropic’s Asia-Pacific president Nick Jaffer encouraged further collective thinking before a panel discussion and speech by Geoff Holt. This distinguished yachtsman, who as a teenager suffered an accident which costs him use of his legs but which did not stop him mastering the waves, built on the impetus of the three previous speakers. His talk proved inspirational. The open forum that followed and which concluded proceedings benefited hugely from Holt’s words.

Those attending, who went through the day without name tags allowing philanthropists to mingle with charities in anonymity, were ultimately reunited with the gadgets and connections with the outside world ahead of making their way home. No day at any screen could match the stimulation all felt from time shared that brimmed with thought provoking ideas, face-to-face quality, and powerful sentiments all the more resonate for being shared in a home-posium environment.

To all those who attended the Global Philanthropic Talking Philanthropy home-posium, “welcome home” had a whole new meaning, ahead of next year’s gathering on September 15th with “mission” already an emerging theme. There is, every prospect of another “quintessentially Global Philanthropic” occasion, as one attendee described the 2016 renewal in a thank you note.